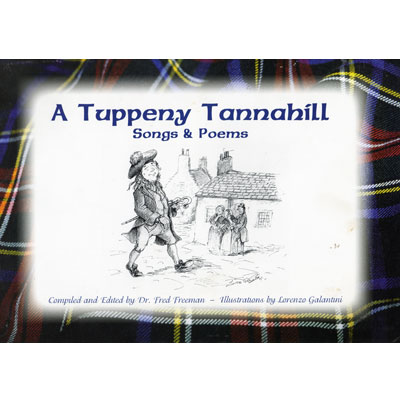 It is with teachers and children in mind that this edition of Robert Tannahill goes forward: hence the presentation with its increased choruses, appropriate words either Scotticised or phonetically written, simplified adaptations of the melodies for singing, inclusion of a full glossary and charming illustrations by the artist, Lorenzo Galantini. The book is, in many respects, a complementary adjunct to the CD series: The Complete Songs of Robert Tannahill (Brechin All Records). Fred Freeman

The Complete Songs of Robert Tannahill – Vol I Number one of a five album series in a ground-breaking project to record for the first time ever the entire works of this huge Scottish talent: a contemporary of Robert Burns, and Paisley’s most famous son. Produced by the legendary Dr. Fred Freeman, producer of The Complete Songs of Robert Burns. Featuring some of Scotland’s best singers and musicians. – Find out more.

The Complete Songs of Robert Tannahill Vol II The eagerly awaited sequel in the unprecedented five-volume project to record all of Tannahill’s songs, produced by Dr. Fred Freeman and featuring a host of folk luminaries. The CD was launched at Celtic Connections 2010 with a concert in the Glasgow Royal Concert Hall. – Find out more.

The Complete Songs of Robert Tannahill – Vol III The third and, arguably, the best yet in the unprecedented five-volume project to record all of Tannahill’s songs, produced by Dr. Fred Freeman and featuring a host of folk luminaries, with singers including Rod Paterson, Ian Anderson, Nick Keir, Fiona Hunter, Brian Ó hEadhra and Lucy Pringle. – Find out more.

Probably Tannahill’s most famous song is The Braes O Balquidder, with its chorus of “Will ye go, lassie go?”, the basis of the well-known song Wild Mountain Thyme, which was used as the title of the first album in the series.

Born in Paisley, Tannahill worked as a weaver, while writing beautiful poems and songs about nature, love and topics of the time with which he sympathised, such as the abolition of slavery, and the plight of the Highlanders after the Jacobite rebellions and the Irish immigrants who flooded into Glasgow looking for work, both of whom were discriminated against.

In the same way that Burns, as well as being a poet, was also a musician (he played the fiddle), Tannahill himself played the flute and, like Burns, understood the importance of rhythm and melody in songwriting, and had a similar mastery of the craft.

‹ A Breath on the Cold Glass