For many years Sandy and a loyal band of musical friends, some professional; some part-time, have been travelling the world, performing gigs in a variety of fun environments.  The core of this group centers around Sandy’s weekly Sunday 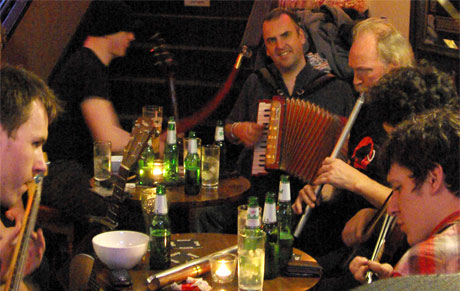 night session, which has been running for over 20 years in various Edinburgh pubs, mainly in the Ensign Ewart, close to the castle at the very top of the Royal Mile. The ‘merry band’ have over the years travelled to Spain, Germany and USA, and do an annual trip to North Germany every November, as well as a yacht-based ceilidh cruise every summer on the west coast of Scotland.

The Ceilidh Cruise normally lasts for one week with a different venue every night. Venues played include:

Every year in the middle week of November, Sandy and friends fly to Bremen, Germany, for a week’s worth of gigs, organised by Joanna Scott-Douglas,  culminating on Friday and Saturday nights in Land und

Still, a lovely converted farm, which is always sold out both nights. Other venues have included: The BoatHause, Vegesack, Korn Bernnai, Worpswede and The English Club, Bremen. Some years, there has sometimes been as many as ten musicians on stage.

Sandy plays regularly in Germany often with Joanna’s band, Coomara, and Sandy has built up a loyal following there.

×
Update Required To play the media you will need to either update your browser to a recent version or update your Flash plugin.