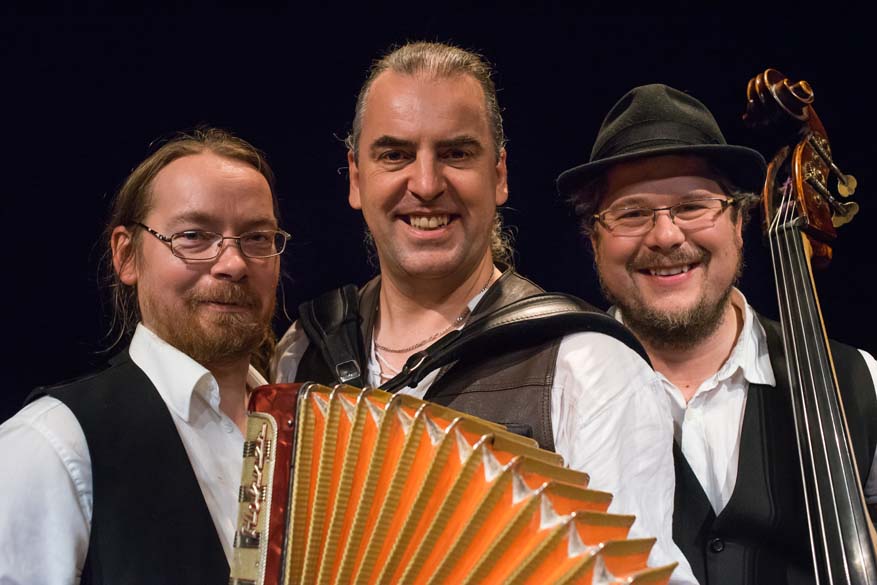 The Sandy Brechin Trio was formed in 2014, under circumstances that even today are still shrouded in mystery, but according to some rumours – perhaps true, perhaps not – enforced consumption of the foul-smelling and hard-to-swallow Swedish delicacy of fermented herring took place at that time to determine the calibre of the flamboyant Scottish phantom of the accordion. By all accounts, it seems like Sandy passed the test with flying colours, since the three musicians have so far completed a number of tours and workshops in all points of the compass both in Sweden and Scotland (even though much of that time has been spent on food and jokes!)

Their debut album Polecats & Dead Cats has been greatly appreciated amongst folk music audiences all over the world; received very nice reviews, and been played on a number of radio stations, along with a live broadcast performance from the BBC Tent at the 2019 Edinburgh International Festival.

At a concert with The Sandy Brechin Trio, you can expect to hear many traditional tunes, as well as contemporary pieces composed by Sandy and Jimmy, backed by big Christopher’s mighty bass lines. Melody and harmony shifting between the accordion and fiddle gives a Scandinavian ring to the Scottish tunes and a Highland depth to the Swedish melodies. Everything is coordinated by Sandy, who often illustrates the music with an artful story, told in the most delightful Scottish accent that tickles the audience’s chuckle muscles into cascades of laughter, particularly if they happen to understand a word of what he’s saying.

The trio also have a wide experience of teaching, and are happy to do workshops in Scottish and Swedish music and dances for both children and adults, if requested.

Sandy Brechin is one of Scotland’s best known accordion players. Sandy has been touring all over the world for many years and he has been recorded on over a hundred albums on various labels. Sandy is a respected teacher of accordion, having held the position of accordion tutor at The National Centre for Excellence in Traditional Music in Plockton for many years.

Jimmy Johannsson is a diverse fiddler and a composer. He has been composing both Swedish and Scottish folk music for almost 20 years. He has been touring in Scandinavia over the last 15 years in different folk bands with roots in both Scottish and Swedish folk music.

Christopher A Bång is a well-known Swedish folk musician. For many years he has been playing music from the Balkans, Ireland, Scotland, Sweden and Russia – he is a world music traveller.

“The technical skill of all three musicians is of a very high level, and it’s easy to get hooked on their catchy melodies. The recording itself is of a really excellent quality, and the accompanying booklet is full of interesting descriptions of the twelve tracks. I eagerly anticipate the next release from this most competent trio.” – Fredrik Thidell, Lira

Introducing the debut album from The Sandy Brechin Trio. Sandy, Jimmy and Christopher combine the Swedish way of playing harmonies with Scottish tunes resulting in this fantastic CD, a mixture of Scottish and Swedish music, traditional and contemporary.