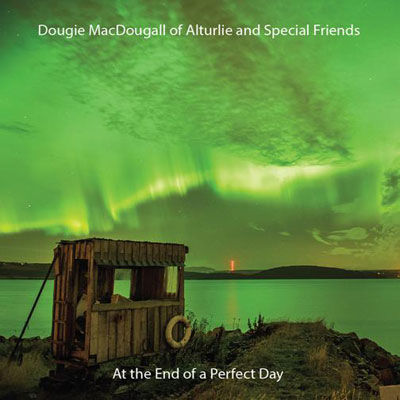 Well-known Inverness local personality Dougie MacDougall has finally brought out, after much demand, his debut album of favourite accordion tunes, at the ripe old age of 88!

Packed full of great tunes, along with some of his own fantastic compositions, the album is a bonanza of Scottish traditional music, with twenty tracks including jigs, reels, polkas, waltzes, marches and slow airs, plus a set led by Dougie on the pipes and a beautiful song sung by his granddaughter.

Having spent more than half a century salmon fishing at Alturlie, just east of Inverness, the front cover of the album features Dougie’s fishing station there. During that time, Dougie raised a family of six daughters, and many members from several generations of the family join him on the album, including his brother Donnie, his sister-in-law Katie, son-in-law Peter, nephews Ian and John Don, and his granddaughter Briagh.

In addition to the talented family members, Dougie is also accompanied by a host of friends from the Scottish Dance Band world and the Ceilidh scene, resulting in a big band sound that is hard to not get up and dance to.

With a foreword by legendary button box player, Freeland Barbour, the accompanying booklet features beautiful photos of the Alturlie and Inverness area, a short biography of Dougie’s amazing life, and full track details, including photos of all the guest musicians.

This is a beautiful album to both listen to and to look at!