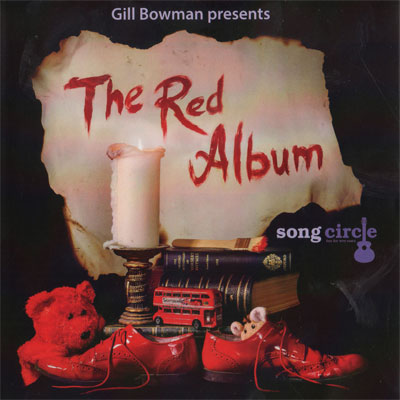 The Red Album was recorded at B&B Studios in Edinburgh, October 2015. Recorded, engineered and mastered by Richard Werner. Song Circle, now in its eighth year, is a unique and independent singing group for babies and children aged 0-5 years old, hosted by Scottish singer/songwriter Gill Bowman in the backroom of the family café in Stockbridge, Edinburgh. Skylark Café is a haven for young families and Song Circle a cornerstone of the day-to-day life of the business. This album is the second in a series reflecting the repertoire of Song Circle and including three new original songs by Gill.

The song My Yellow Ukulele was specially written by Gill Bowman for the wee ones who attend song circle, a singing group for parents, babies and children under five in Edinburgh, Scotland. The other songs on the album are also song circle favourites and include some classic nursery rhymes, traditional Scottish lullabies, poems and folk songs. – Find out more.

The perfect soundtrack to gently lull wee ones off to sleep.Practically guaranteed to put anyone to sleep, this album is designed to play as one long dreamy soundscape. It begins with bright tunes at the start of baby’s bedtime routine, and gradually becomes quiet and gentle. By the time you tiptoe from the nursery, your baby will be sound asleep. Warning: Also effective on adults! – Find out more.

Stories from the Hamper

Gill’s stories have been inspired by the toys and characters she sings about in her regular Song Circle sessions. These sessions take place in the cosy back room of Skylark Café in Stockbridge, Edinburgh. Babies and children under five sit in a circle with parents, nannies and grandparents and sing traditional nursery rhymes, Scottish sings and originals songs. – Find out more.

Although Song Circle is first and foremost a live thing, the albums have generated a loyal following: My Yellow Ukulele, The Red Album (like being at a live Song Circle), The Lullaby Album (for lulling off to sleep) and Stories from the Hamper (great for long journeys or rainy days indoors). GOLD features another 32 tracks – many songs and rhymes which don’t feature on the other albums, including the much requested ‘dancing songs!’. – Find out more.