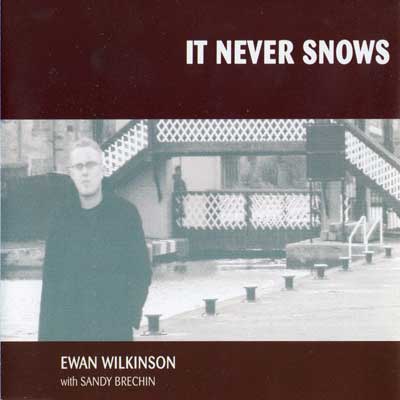 Inspired by a number of things, Ewan wrote this song in the realisation that in Edinburgh we never get proper snow, the end of a strange and confusing relationship and listening to a lot of southern soul looking for some warmth.

The single also includes Both Sides Of The Tweed, a song that has become indelibly linked to Ewan over the years of performing around Scotland.

Sandy and Ewan have been touring together around such venues as The Star In The Square Folk Club and The Lismore in Glasgow, Leith Folk Club, and Hootenannies in Inverness. Together they play a mixture of Scottish, Irish and English traditional songs and tunes, together with contemporary folk songs and original compositions.

Ewan Wilkinson was brought up in the Scottish Borders, and has a strong grounding in the Scottish song tradition as well as a unique insight into the music south of the border. Sandy has toured and recorded extensively with Burach, Seelyhoo, The Sandy Brechin Band and his ceilidh band The Sensational Jimi Shandrix Experience.

The debut album from ‘the new young voice of the borders’, Ewan Wilkinson. An astonishingly mature and talented singer/guitarist, his voice breathes new life into old songs and he carries on the tradition with his own excellent song compositions. Find out more.