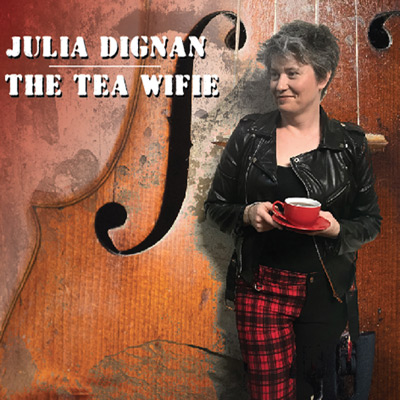 For her debut album, Scottish fiddle player, Julia Dignan, brings together friends old and new to capture some of her favourite musical moments from the last 30 years!

Originally from Montrose, in Angus, Julia has a wide and varied experience of performing: in the 90s, as Julia Legge, she was a founder member of Gaelic band Tannas and featured on their first two albums. More recent highlights include performing six summer seasons in the World Famous Taste of Scotland Show at Edinburgh’s Prestonfield Stables; appearing in The Royal Edinburgh Military Tattoo as part of the fiddle group Hjaltibonhoga; playing on BBC Radio Scotland’s long running Scottish dance music programme “Take the Floor” with Matthew Maclennan, and welcoming in the New Year as part of Edinburgh’s Hogmanay with The Sensational Jimi Shandrix Experience.

Each of the twelve tracks on the album has an accompanying story and a distinctive mood – there are tributes to some of the legendary Edinburgh pub sessions which have been and gone over the years, as well as to some of Julia’s other musical adventures along the way in a huge variety of right up to the present day when it all almost went horribly wrong last year in a roller skating accident!  Whether you prefer jigs, strathspeys, Gaelic melodies, marches, new compositions or old.

“I just thought I’d let you know how much I’m enjoying your CD. I bought it from you when we recently played in Hjaltibonhoga in Sydney. I’ve just about worn a hole in it I’ve played it so much. I especially love Laand Faa by Margaret Robertson. The way you play it is very special. It sort of mesmerises me! Amazing playing on the whole CD. Thank you so much. Please make more CD’s and keep playing fiddle forever.” – Ann from NZ

“Traditional Scottish music, with too many guests to mention. I was immediately completely taken in by it, because I think it’s a gorgeous, contagious album that I can’t get enough of. Recommended!” – Holly Moors – Moors Magazine

“It’s a great album, crammed with great tunes and I know that our audience will enjoy it.” – John Murray – BBC Radio nan Gaidheal

‹ The Lass O’ Bon Accord