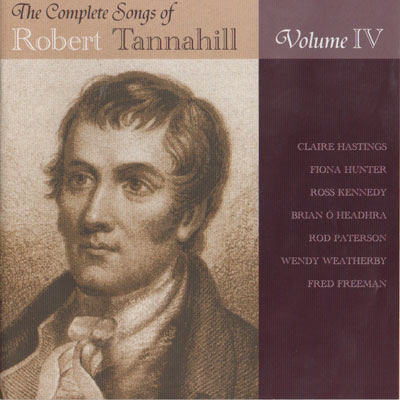 “Fred and co have brought the Tannahill songs right back to life…as authentic and fresh as the day they were conceived…flavours of jazz, blues, swing, klezmer and the odd Russian folk tune: the end result being a very thoughtful, respectful an brilliantly executed collection of songs, with beautifully captured vocal performances. I’m sure Robert Tannahill would have it no other way. ” – Ali Hutton (Old Blind Dogs)

“Very impressed with the musical arrangements, with the singing and the overall production of this album…all the songs and singers are perfectly matched…would strongly recommend this outstanding project to all music lovers. ” – Cathal McConnell (Boys of the Lough)

The fourth and penultimate volume in Dr Fred Freeman’s landmark recording series The Complete Songs of Robert Tannahill reflects the breadth of influence that informed the Paisley weaver/poet’s compositions, including elements of Irish, Jewish and baroque music. As ever, these are married with Freeman’s fresh contemporary approach to arrangement and performance, as reflected in his top-drawer musical cast.

What do you want for Christmas? ›